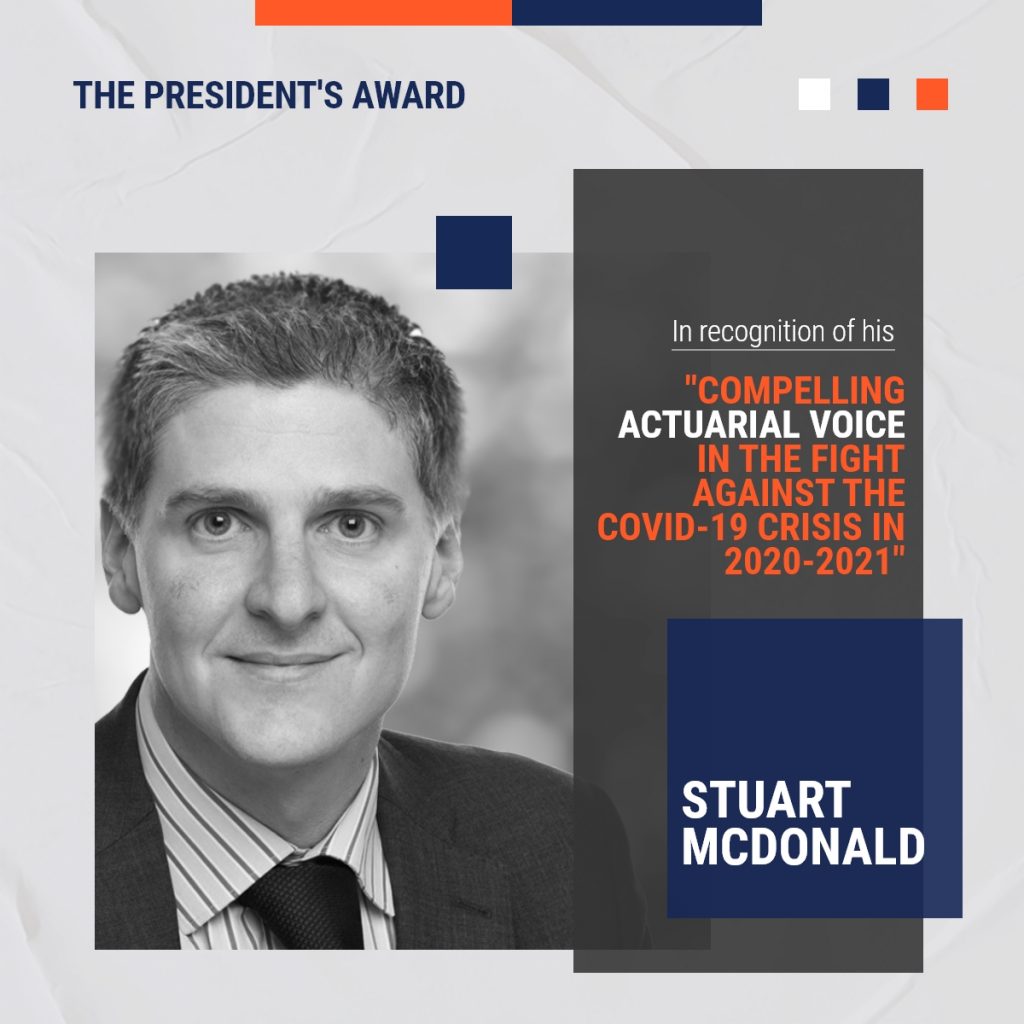 The President’s Award was presented to Stuart McDonald on 24 June 2021 in recognition of his compelling actuarial voice in the fight against the Covid-19 crisis in 2020-2021. He articulated the profession’s assessment of the unfolding pandemic to a wide non-specialist public with clarity, insight, and humility. He has been instrumental in building a large and favourable media presence in the social and national media for the IFoA and the profession.

He is also the founding co-Chair of the Covid-19 Actuaries Response Group.

What made you step forward to form COVID-19 ARG?

I had a strong sense that this was a topic that the profession had to speak up on. We had the expertise to understand and model both infections and the resulting mortality.

Actuaries were saying nothing publicly and the IFoA, like many organisations, was internally focussed in the face of a potential crisis.

Initially, I didn’t think much beyond assembling some experts to see if there was consensus on the likelihood and consequences of a global pandemic. It quickly became clear to me that others shared my desire to step up and do what we could to respond.

What was the most consequential aspect of ARG and what did you learn most from leading this group?

I’ve been proud of the impact that the group has had, by providing objective analysis presented in an easily digestible way.

Much of the analysis we’ve done has been quite simple compared to normal actuarial work but it has still been impactful with politicians, journalists, other scientists and the public. We realised early on the importance of drawing tentative conclusions from incomplete data. Sharing our thinking would start a conversation, and feedback received from people with different expertise or perspectives would often lead to improved understanding.

Could you tell us why you decided to be an actuary?

To be honest I had absolutely no idea what an actuary was until I was in my mid-20s. I’m not exactly from a professional background.

The first time I remember hearing the word “actuary” was a couple of years after graduating. I applied for a job calling people up to ask them questions about their employment history. This was so actuaries could calculate if they had lost out by opting out of company pension schemes. The interview went well and not only was I offered the job but I was told that I could have a better-paid job if I could pass some exams. Challenge accepted!

Can you tell us the biggest regret or mistake you have made, and what you learnt from it?

It’s probably more of a near-miss than a mistake but I came very close to not getting a degree after I lost my focus in my second year of university. It was a bit of a wake-up call for me.

I learned the importance of asking for help when you need it. It didn’t occur to me to seek help to get back on track until it was almost too late.

If there is one thing you like to see changed in the IFoA and the profession, what will that be?

Actuaries need to be bolder and better at making their voices heard. Too often we retreat to the safety of doing ever more analysis instead of acting on our conclusions, or explaining to our stakeholders why they should act.

We need to take more calculated risks, personally and professionally, if we are to succeed. The world doesn’t owe us a living!

Most immediately I’m looking forward to taking a bit of a break in August – it’s been a busy time and my work-life balance feels out of kilter.

I probably need to take some time to think about longer-term plans. Professionally, I’ve had a lot of new experiences in the last 18 months, many of which I’ve found very satisfying. But with so much happening at once it’s been a lot to process.