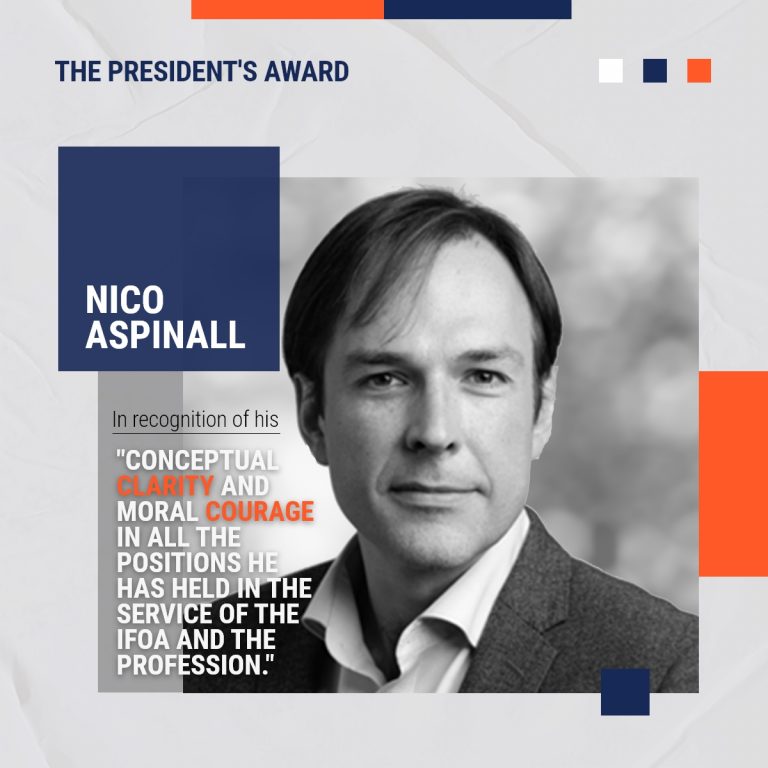 The President’s Award was presented to Nico Aspinall on 24 June 2021 in recognition of his conceptual clarity and moral courage in all the positions he has held in the service of the IFoA and the profession.

Nico has been the President’s kindred spirit and fellow traveller in an intellectual journey to re-discover the profession’s purpose in addressing the systemic sustainability challenges of our time.

Could you tell us why you decided to be an actuary?

I wanted to use the maths I’d learned doing a physics degree in helping to solve real-world problems and earn money in the process. I really only heard about actuarial science after I’d decided not to stay in academia and to move to London, but when I discovered I could use maths, programming skills, writing and communicating to help people understand complex financial issues I was hooked.

What is the proudest piece of work you have done as an actuary?

In terms of career, I would say launching the world’s first DC LDI product to match post-retirement annuity cash flows in 2010. We made it a part of the default at Barclays and worked with F&C (now BMO) to manage it. Everything changed with freedom and choice but I still see that methodology as being the basis for drawdown models once scale post-retirement is achieved in DC or CDC plans.

In terms of volunteering, I think the climate change risk alert. In chairing the R&E Board (now Sustainability board) we identified risk alerts as a clear leverage point for change. It took a bit of lobbying to get it through but the language around climate change being a material financial risk was very deliberately chosen and I think that it has had a major impact on the profession.

What do you think should be the purpose of actuaries (profession) and the IFoA?

I’ve written a bit about this but I would see the actuary as being someone who can get different stakeholders to agree on their objectives for an enterprise or pool of capital, translate those objectives into a sensible range of possible outcomes to focus on managing and gain agreement on the strategy that is going to be followed. We use maths in this toolset but probably the communication of maths is as important in being successful against that purpose. If you think about every actuarial situation I think it can be described in those terms. The IFoA’s purpose I would see as being enabling and promoting. The IFoA should make sure it is as easy as possible for people to hear about the opportunity to become an actuary, to talk to others about problems and to work on solutions. It’s vital we face the new problems of the 21st century with the support of the IFoA as a platform and champion of the collaboration actuaries have with each other and outside of the profession.

What is the most consequential book or lecture you have read or attended?

Probably “Panarchy” by Gunderson and Holling. It outlines a theory of complex adaptive systems that says that they naturally lose resilience as they gain capital and become maximised for efficiency. If pushed to be too stable they can collapse and then have to rebuild themselves. It highlighted a number of things for me in the financial crisis around the regulation for a narrow range of outcomes and stochastic modelling, which is basically useless as it only tells you about the least interesting parts of the possible futures ie the more stable ones. The book is about ecosystems, but the link to the evolution of our economic system is very strong for me.

Can you tell us a story from your childhood that inspires you to be what you are today?

I was always entrepreneurial and my school had a kite club where we learned to make kites. I set up my first business at the age of 11 “Keen Kites” to sell kites to other kids at my school. I would have made money from it (at the level of an 11-year-old!) but more importantly it taught me to find something you enjoy doing as the basis of your job. If you want to do the thing you spent half your waking week doing then you infect everyone else with your enthusiasm. I couldn’t wait to get going on the next kite and the money was not that important.

Can you tell us the biggest regret or mistake you have made, and what you learnt from it?

I don’t really use the words “regret” or “mistake” because I think they carry too many negative connotations and might stop you from learning about what has happened. You can only really learn by doing things worse and better and deciding which steps you want to repeat and which you don’t. You can’t change the past, but you can improve your performance and your reaction to events in the future.

If there is one thing you like to see changed in the IFoA and the profession, what will that be?

I’d like to see the IFoA less protective of itself and actuaries. I think it can get so tied up in what people and lawyers might think of its pronouncements that it loses sight of the fact they’re opinions and doesn’t say them. It can also fail to make the most of the brains inside the tent by putting up barriers to entry for those without a membership. IFoA should be as open as it possibly can be, open-source ideally.

I’ve always wanted to be useful rather than rich. I’ve found a slot where I think my best use is to improve the lives of DC members and help address climate change and the long-term sustainability of our society and bio-society through the power of the investments people have in retiring. That keeps me motivated, whatever happens in a day.

I had a huge number of jobs through school and university, and I saw factories, farming, gardening, bars and office jobs before I had a degree. I almost became a blacksmith and tried (and failed) to become a science fiction author, but in the end, London called. I worked at Deloitte, Barclays and Towers Watson, but running my own business as a consultant was probably the most rewarding in terms of doing everything in the business and having no one to blame. As CIO of a pension scheme now I’m still learning every day, I think that’s the most important bit.

Can you tell us something which is not widely known about you?

I’m a bit obsessed with Chopin and have been teaching myself piano so I can learn to play his pieces. It’s not the easiest entry point to the piano, but it’s so different to my job that after a stressful day, 30 minutes of piano and using totally different parts of my brain can reset me for whatever’s going on in the evening.