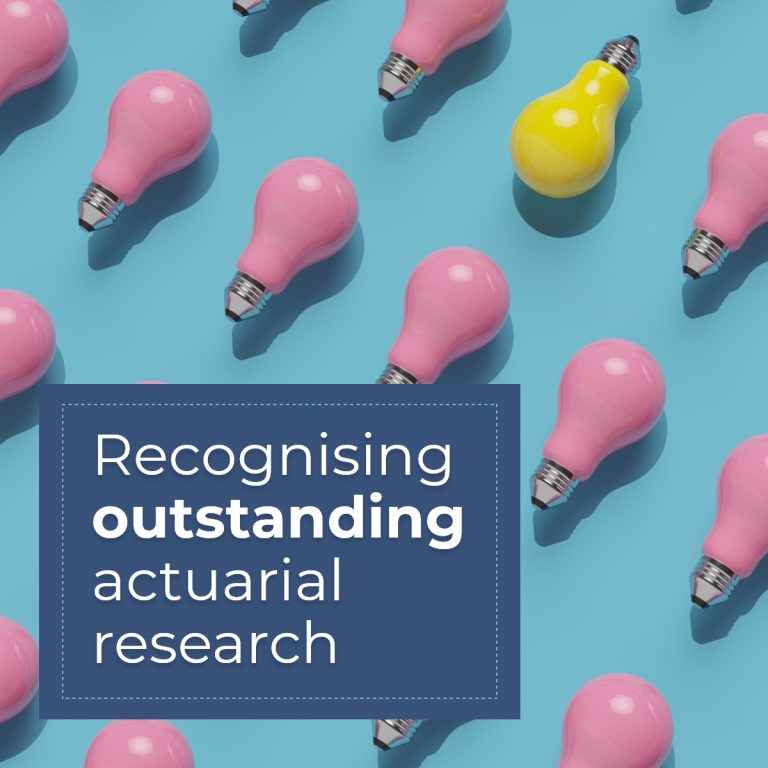 Every year, the IFoA awards annual prizes for the best papers in actuarial research. Last week, I was delighted to announce the following recipients of the Geoffrey Heywood Prize and the Peter Clark Prize for Best Paper.

Silvana M. Pesenti, Pietro Millossovich and Andreas Tsanakas for their paper ‘Reverse Sensitivity Testing: what does it take to break the model?’ The RTLB Publications Sub-Committee said that this was a technical mathematical paper primarily of value to specialists, but also it demonstrated much original research and offered a new approach to sensitivity analysis that is likely to endure. This paper was published in the European Journal of Operational Research in 2019.

Ronald Richman and Mario V. Wüthrich for their paper ‘A neural network extension of the Lee-Carter model to multiple populations’. The RTLB Publications Sub-Committee said that this was an illuminating and thought-provoking research paper that is likely to influence practice. It was well-written, comprehensible and an original academic contribution. This paper was scored highly by the judges. This paper was published in the Annals of Actuarial Science in June 2019.

Geoffrey Heywood Prize is awarded to a paper or journal article that demonstrates excellent levels of communication and engagement with a general audience. The Peter Clark Prize is awarded for the best paper presented to, or published for an actuarial audience. Both of these prizes are funded by the IFoA Charitable Foundation and they have a value of £1,000 each.

A prize does not have to be awarded if it is felt that none of the nominated papers achieve the accepted standards. Papers can be awarded a Highly Commended Prize, although this does not have a financial award.

Some recent winners of both prizes have chosen to donate their prize money to charity. For example, in 2018, the Peter Clark Prize winners donated their prize to Age UK, a leading charity for older people, and Bloodwise, a UK-based charity dedicated to funding research into blood cancers. Prize-winners have also used their prizes to support actuarial projects. In 2020, one winner of the Geoffrey Heywood Prize used his prize to partly finance a series of actuarial webinars.

Nominations for both of these prizes come from individuals within the actuarial community. An online nomination form is made available on the IFoA website. The website also has details of prize criteria and lists of previous winners. In 2020, there was no longer a requirement for any of the authors of a nominated paper to be members of the IFoA.

After the closing date of 3 August 2020, the Research and Thought Leadership Board (RTLB) Publications Sub-Committee reviewed all of the nominated papers and made recommendations of prize winners to RTLB, who in turn gave formal approval.

Any cookies that may not be particularly necessary for the website to function and is used specifically to collect user personal data via analytics, ads, other embedded contents are termed as non-necessary cookies. It is mandatory to procure user consent prior to running these cookies on your website.