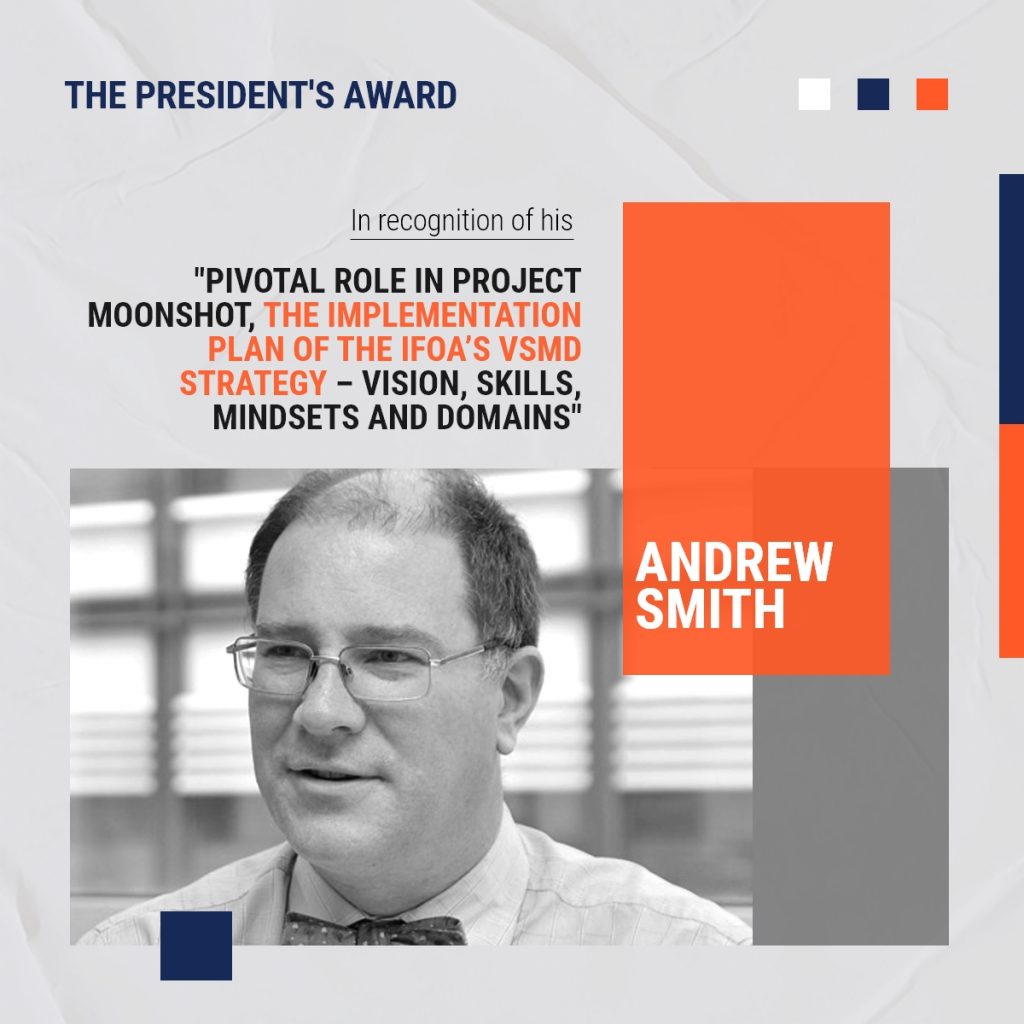 The President’s Award was presented to Andrew Smith on 24 June 2021 in recognition of his pivotal role in Project Moonshot, the implementation plan of the IFoA’s VSMD strategy – Vision, Skills, Mindsets and Domains – in the summer of 2020; and his thought leadership and sterling track record on financial modelling and financial economics over a sustained period of more than 25 years.

Andrew worked for many years as an actuarial consultant. As well as the regular life, GI and pensions work, he also studied nuclear power station decommissioning, student loan repayments and spread betters who bafflingly managed to be the wrong side of every market move.

In 2015, he was elected an Honorary Fellow of the IFoA. He is now teaching and writing a PhD on model risk and extreme percentiles.

What was the most significant aspect of Moonshot?

The need to be multi-disciplinary n recognition of the fact that much of what actuaries need to know is not purely actuarial.

What was your most significant paper in the last 25 years?

In terms of impact, probably the financial theory of defined contribution pension schemes, with Jon Exley and Shyam Mehta in 1997, now known as EMS. Several of my papers won prizes, but not EMS, which went down like a lead balloon at the time. There is more, even better, work in my pipeline!

How do you see financial economics evolving?

Finance is a broad discipline, but I see three broad areas where we need better answers to inform actuarial practice. The first is understanding the link of investment returns to environmental sustainability. The second is the role of illiquid assets in funding insurance and pension liabilities. The third is how we address deep uncertainty in decision making.

I heard that you did not complete the actuarial exams – what was the story here?

In the mid-1990’s I spent several years working for an investment bank, which saw little point in the actuarial qualification. When I returned to mainstream actuarial work, my employer saw more value in what I had learned working in capital markets than in what the actuarial education process had to teach me.

The 1990s were not a good time for actuarial education. The world had changed rapidly, while our education had failed to keep up. Question papers and model solutions from that era shock me even now. Some colleagues encouraged me to ‘play the game’ and tell the examiners what they wanted to hear, even if I believed the opposite. I could not bring myself to do this.

Instead, I worked hard to bring new material to actuarial audiences and contributed to the necessary developments in our curriculum. As a result, I think we are in a better place now, and our education offering is more relevant to actuarial students working in diverse domains.

Can you tell us a story from your childhood that inspires you to be what you are today?

My father, a biochemistry lecturer, had a subscription to Scientific American. In the 1970s and early 1980s, I eagerly awaited Martin Gardner’s monthly column on mathematical games. This got me hooked on recreational mathematics. I enjoyed mathematics competitions as a teenager.

My early career plan was to be a civil engineer, and I got some work experience on construction sites. However, Sidney Benjamin opened my eyes to the actuarial world when I landed a summer holiday job at Bacon and Woodrow.

Can you tell us something not widely known about yourself?

In 2015, I left the IFoA Honorary Fellowship award ceremony early to lie on my back in the middle of Bank junction, with a saxophone and a placard protesting the unacceptable traffic danger, after a careless truck driver crushed a PWC consultant to death. Thankfully that junction is now quieter, cleaner and safer after most motor traffic was banned.