Connect the dots across domains or paradigm. Navigate the paradigms. 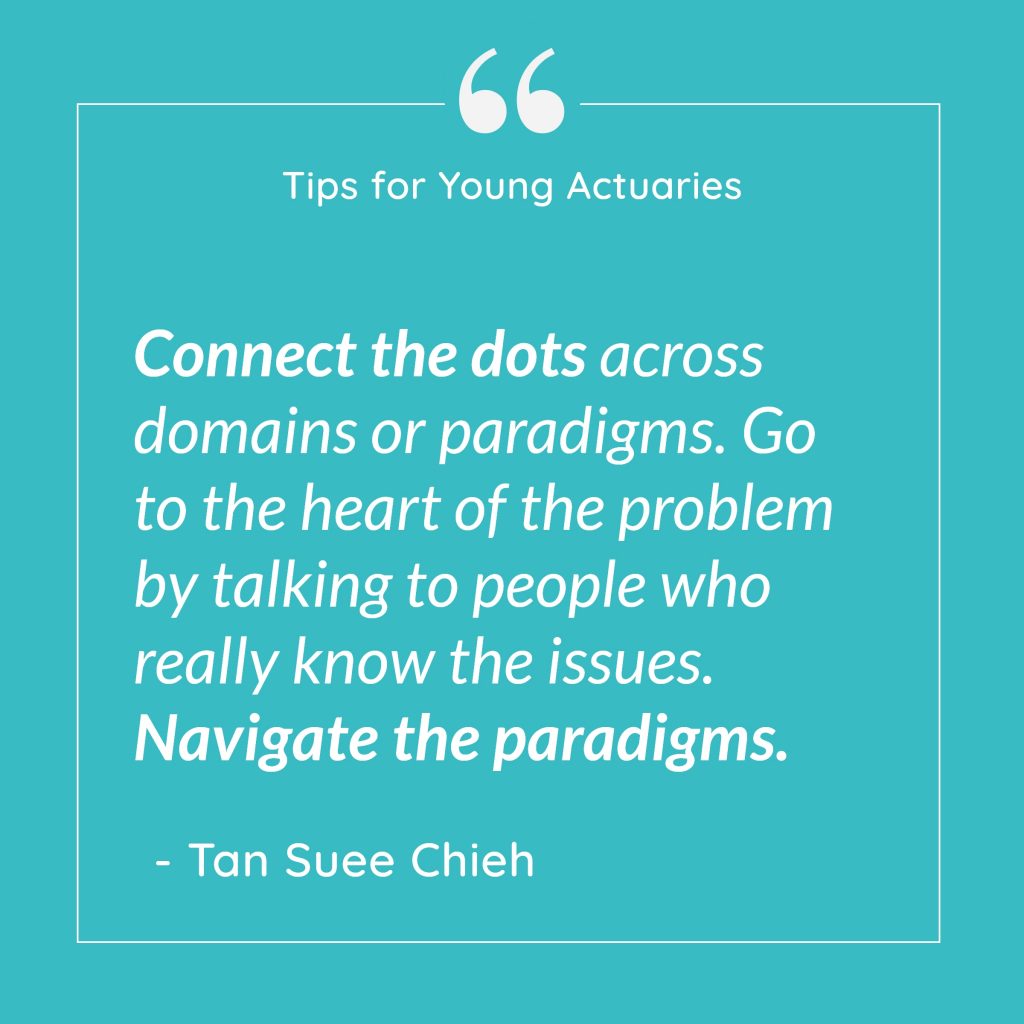 SIXTY ONE TIPS FOR YOUNG ACTUARIES

Tip 51 “Connect the dots across domains or paradigms. So read different types of books, talk to different groups of people and go to different places. Go to the heart of the problem by talking to people who really know the issues. Navigate the paradigms.”

This is a most important skill in an increasingly complex world. It is at the heart of a multi-disciplinary approach to problem-solving.

The word paradigm was first popularised by the physicist and philosopher Thomas Kuhn in the book “The Structure of Scientific Revolutions”.

Given my nature and training, I have always been curious about other domains and paradigms. I have an inclination for contextual thinking. Problems (or opportunities) are defined by contexts, and very often they change in nature when we redefine or change the context. By changing the context, we can see the problems in a new light. And other points of view and new solutions are likely to emerge. Creating the space for this to happen is an art.

Consequently, one can then join the dots across paradigms.

I first learnt the word “paradigm” in the 1990s, from a customer service guru, when we were improving the customer service and culture in Prudential Singapore in the mid-1990s. The customer guru said that to change the culture radically you got to change the paradigms (the beliefs, the rules, the operating principles) in which the people are working in. Seldom will the people who are at the heart of the existing paradigms able to revolutionise existing practices – at best they can improve it incrementally. This is so because they have complete vested interests in the existing paradigms. The challenge has to come from people outside or at the margin of paradigms.

This is true in all the change management efforts I know.

Here are three examples of how this principle operates

Part I – Cultural change in organisations

Most simple, tame, and complicated problems can be solved within existing paradigms – this is often about incremental change. To solve complex problems and create transformational change, leaders need to change or shift paradigms. Leaders will need clarity of purpose, courage, and humanity to tackle these. Such leaders are rare.

The VSMD strategy calls for a multi-disciplinary approach to problem-solving because the nature of the problems we are facing are increasingly complex. The boundaries defining the systems and industries we work in are being impacted by changes inspired by the digital revolution as well as other sources of systemic risks or radical uncertainty.

In the new digital world, problem-solving in life, general, and health insurance and pensions will require us to know data collecting and underwriting, the way benefits are framed and delivered, claims assessed, pricing best optimised and the whole experience is put together will be completely different from the pre-digital world.

This is not just about data science and machine learning. It is also about understanding digital ecosystems, behavioural psychology, genetics, robots, new economics, climate science and a whole range of disciplines. To bring problem-solving to bear we have to adopt a multi-disciplinary approach because most of the innovation will happen at the intersection of disciplines. We need to connect the dots across the various disciplines to create effective and meaningful answers.

The IFoA’s recent Finance and Public Interest Seminar series made it clear that we have to join the dots across many paradigms if you want to understand why Finance is not serving the public interest today.

This is unmasked by Global Financial Crisis GFC in 2008 and the COVID-19 pandemic crisis, numerous financial and accounting scandals and sustainability challenges and the risk transfers we are seeing in the financial services.

The following points are relevant

Clearly, this is not just about actuarial science. It touches on political philosophy, comparative culture, ethics, evolutionary psychology, anthropology, history of science and mathematics, comparative culture and the drive to quantitative analysis which began during the age of enlightenment in the 17th century.

TIP 1 to Tip 7 - The Foundational Years

1. Congratulations on becoming an actuary. It is the beginning of life-long learning.

2. The first principle of success is constancy of purpose

3. The second principle is drive, focus and determination.

4. Imagine what is possible with your life.

5. Success is inevitable to the person with unlimited enthusiasm. Read Napoleon Hill’s “Law of Success”.

6. If you face challenges or failures, regard them as learning opportunities. Never give up.

7. Develop the art of speaking well in public. Dale Carnegie’s book on “Developing Self Confidence in Public Speaking” is still the best around.

8. Have a strategy on your career. Pursue it with passion. Passion is at the heart of excellence.

9. Take ownership of your work. Go the extra mile for the work you are given.

10. Be Responsible. As a person and in all the roles you take on.

11. Always prepare. If you fail to prepare, you are preparing to fail.

13. Be the go-to person in your workplace. This is not difficult. Use C.A.D.I.F. – Committed, Attention to Detail and Immediate Follow Up – this is from Mark McCormack’s “What they do not teach you at Harvard Business School”.

14. Be a pioneer. Be bold. Without courage, there will be no progress.

16. Have a a financial savings program. You are as rich as you save, not as you earn.

17. Acquire assets not liabilities. Learn to say no to stuff which do not matter. Simplify your life.

18. Do not time the market. It is time in the market that matters.

20. Do not forget term life and health insurance for yourself and family.

21. Economically, your job is your greatest asset. Treasure it and invest in it.

22. Be quick to say sorry and take responsibility. Do not cover up. Be authentic. Always.

23. Engage your colleagues. Do not avoid your bosses, and do not forget the cleaners and receptionists.

24. When investigating a subject or solving a problem, look at different angles. Always turn the page. Never assume anything. Turn every goddamned page.

25. You are an actuary. You must do your work with care and competence. Understanding the problem is more important than getting to the answer.

26. Live your actuaries code – all the time. Be a credit to your profession.

27. Volunteer to do things for others; the community, the profession or the workplace. Be helpful, kind and generous.

29. Challenge the consensus and groupthink. Do it with respect and humility.

30. Read Frank Redington’s papers, in particular, The Flock and the Sheep. Read past presidential addresses. Also, Craig Turnbull’s History of Actuarial Thought. This will give you a flavour of our profession.

31. If your workplace is not right for you, leave. It is better to act early rather than late. You are more independent than you think.

32. Make notes. Carry notebooks with you. Be inspired by Leonardo da Vinci.

34. Invest time in Quadrant 2 activities. Things which are important but not yet urgent. Read Steven Covey’s “7 Habits of Effective People”. It is still one of the best books on personal development and leadership.

36. Read widely – at last one good book a month. Any book, which gets your attention. Of relevance to our profession are those on digital and biotechnologies, social platforms, new economics, culture, behavioural finance and genetics.

37. It is not only about knowledge. The real voyage of discovery is seeing things with new eyes. Question the paradigms you operate in. Read Gillian Tett’s ‘Silo Effect”.

38. Have mentors, coaches and guides. Be guided by the stars of the night and not the lights of each passing ship.

Tip 40 to Tip 50 - Taking a Sabbatical, Family and the Second Half

40. Your partner in life. This is probably your most important decision. Use your head wisely. And your heart.

41. Take a long sabbatical. You can do this in-between jobs. Take a second degree, which is very different from your first, if you can.

42. Spend time with your family. Children, siblings and parents. This is precious.

43. Make your message compelling. Never give a speech unless you have something meaningful to say.

44. Read Lynda Gratton’s “The 100 – Year Life” and Herminia Ibarra’s “Working Identity”. These will help you in designing your increasingly long life.

45. Treasure your health. Have an exercise regime. Every day. Get a gym or yoga trainer, or any other trainer.

46. Sleep well. Sleep helps us improve our concentration and productivity. And enhances our immune system.

47. Always be engaged. This means listening and paying attention.

48. Always be engaging. This means speaking to the person and not at the person.

49. Understand culture. Culture is the game in town.  The rest are sideshows.

50. The internet has democratised knowledge. Curate your own digital library. But be focused! Social media is part of life – use it.

51. Connect the dots across domains or paradigms. So read different types of books, talk to different groups of people and go to different places. Go to the heart of the problem by talking to people who really know the issues. Navigate the paradigms.

52. Care about is happening in our world. Make a difference. Remember Redington, who is probably the greatest actuary in the last 100 years, said, “An actuary who is only an actuary is not an actuary.”

53. Your spiritual and inner lives are paramount. Do yoga, prayer or meditation.

54. Do not lose force on distractions and irritations.

55. Your attention is your greatest resource. Use and direct your attention wisely. Understand narrow and wide attention. Read Marion Milner’s “A Life of One’s Own.” It is revelatory.

56. Most of us are mechanical and asleep most of the time. Wake up. Waking up means mindfulness and walking into a space of self-awareness.

57. We have a choice on how we want to respond to others and external events. Read Victor Frankl’s “Man’s Search for Meaning.” Only human beings can do this. Use this gift.

60. We live in a world of uncertainty. Use judgement, not models.

61. COVID-19 is unmasking the precarity of the world. Use your influence to help create a better world.